Once there was a time when limousine used to be a vehicle for the wealthy businessmen. Today, even an average class person also prefers to hire a limousine for every occasion such as wedding as well as birthday parties. A limo is a luxury car that provides a class for the travellers.

Limousine gives you a complete feeling of a star and you are treated like a star when you get out of the limo. The limo is considered as a lavishness vehicle with great comfort and style. These are a status symbol for the wealthy people. The term “Limousine” is derived from the name of French region called as “Limousine”.

These days, a number of limousine rental companies are available in the market that have made it possible for everyone to hire a limo for all their special occasions. Hiring a limo for the wedding celebration is the most common trend. Limo Rental in NYC is especially associated with those who aspire to hire a luxury car for the celebration of special events.

Limousine services are usually availed for taking the bride and groom to the church and reception with style and comfort. It is obvious that everyone aspires to make everything perfect for their special day. The luxurious limousine serves to their purpose of riding in class and comfort.

Always look for a limousine service that can give the wonderful services. Take your time to find out the best service provider among all the service providers. You must be clear about the size, capacity, and type of the limousine that suits to your needs. Once you have all the specifications in your mind, then you are ready to look for the best limo.

The colour of the limousines should be decided according to the event. For example, a white limo is said to be the most perfect limousine for the wedding occasion. You can ask the following questions to your service provider, if you are renting a limousine for the first time:

Experience: Try to inquire that since how long the service provider is in the same business.
License:      You must know whether the company is licensed to operate or not?
Insurance:  Try to know whether the limousine service that you have hired had commercial insurance coverage, if any accident happened before.
Affiliation:    Make sure the company is affiliated with the Limousine Association on a national level.

Hire a company that meets your all above mentioned requirements. 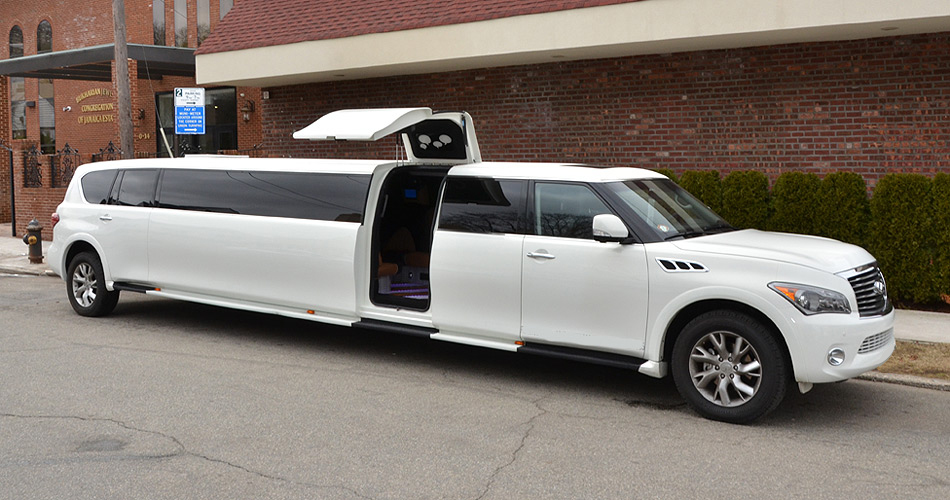 The Ever Changing City

The Evolution of Wedding Cars: From Wagons to Limo Rentals

In New York City, change has become customary among most New Yorkers. They change their wardrobe, their hairstyle and color and even change their friends in a blink of an eye. People in NYC are so much into change that they have been able to leap forward from one generation to another in a single night. If so much is true, you may begin to wonder, “if change has became a customary in the city that never sleeps, can we also expect some changes in the matter of matrimony and weddings, and what changes can be done there for wed couples should definitely look for? Or would tradition kick out the undying change that most people are calling and reaching out?

Years and years ago, even back when everything was black and white, weddings were made and were practiced by all, if not but most, religion to symbolize the unity of a man and a woman.  This practice has turned into an undying tradition that even reached up until the current time. As we travel back across time, we could ever notice that lots of changes were noticeable from the very beginning: from long sleeved wedding gowns to more sophisticated ones, from doing it only on sacred places like churches to doing the wedding to gardens and beaches, and of course from horse carried wagons to the 70’s chevy’s up until the 21ft century’s wedding limousines.

Changes were quite noticeable since then, but most importantly the mode of transportation of the newlyweds and how they can acquire it has been one of the changes that was quite obvious. Before, rentals of limo[that as I know of] and chevy’s were quite unusual but since the advent of the 20th and 21ft century, wedding limo’s were quite handed out by your nearest NYC limo rental services that basically cuts of the price to let you save some stash for your honeymoon . Well, unlike your carriages and wagons before, limo’s are quite much comfortable to wait up until you walk the red carpeted aisle before saying “I do’s”.

As of course, technology has quite somehow created the blueprints on how these cars and mode of transportation for the bride and groom should be made. Before, just pulled by a horse or any 4-legged animal, nowadays, diesel and turbo engines has created a more easier way for the newly wedded couples to cut across the ever busy streets of New York.

Also now, since New York has really updated its transportation for weddings, you can always and easily find the nearest wedding limo rental service in New York City. This made everything a lot easier for most couple, as everything will be prepared out for them. Imagine, the perfect wedding without exerting too much effort to look dragging on the wedding day and not even spending to much as there are tons of cheap limo rental service in NYC. If you think that NYC is on its peak when it comes to wedding, well, just imagine, how change can affect the wedding tradition and even the mode of transportation for the couples in the next few years.